The general aim is to understand the role of 1st row d-block metal ions in the biological processes. We focus mainly on copper, but include often also zinc, iron, etc. These metal ions are mainly bound to peptides and proteins, where they perform essential biological functions. Cu serve mostly as catalytic centers in enzymes and misregulation has been linked to several diseases. 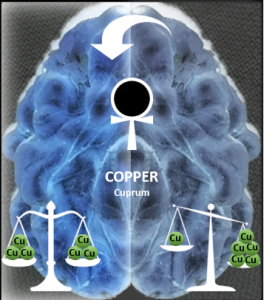 1.1) Cu and Zn binding to the peptide amyloid-beta linked to Alzheimer’s disease:

This subtopic was one of the central theme during the last years. Amyloid plaques are a hallmark of Alzheimer’s disease patients and they consist mainly of the peptide amyloid-beta in form of fibrils due to the self-assembly of the amyloid-beta. High amounts of Cu, Zn and Fe were found in these plaques. Our group is interested in the characterization of the interaction of Cu and Zn with amyloid-beta, the impact on the self-assembly and in the case of Cu on the redox activity. Indeed Cu-amyloid-beta is redox competent and can produce reactive oxygen species, which might contribute to the oxidative stress observed in Alzheimer.

1.2) Cu- and-Zn-trafficking between proteins and other biomolecules, related to Alzheimer’s or other diseases:

We are also interested in the Cu and Zn trafficking around amyloid-beta, i.e. to decipher which proteins can provide Cu or Zn to amyloid-beta, and which could retrieve it. This is important because it is thought that Cu and Zn bound to amyloid-beta increase their toxicity. We investigate different metal-binding proteins/molecules like metallothionein, serum albumin, models of Copper transporter 1, glutathione, etc. concerning Cu transfer. We work also towards the design of peptide based molecules to readjust the mismetabolism of Cu in Alzheimer’s.

The team is also specialized in peptide/protein synthesis allowing to obtain genetically encoded biomolecules such as peptides (<50 AA) or small folded proteins (<150 AA) by using Solid Phase Peptide Synthesis (SPPS Fmoc/tBu) and Chemical ligation (NCL, SEA ligation) techniques. Also, the design and synthesis of unnatural amino acids modified by a metal-binding site, a biosensor or an imaging agent are another part of our key skills and their introduction to peptides gives access to a large variety of metal binding peptides/proteins helping to develop applications in the field of:

We are interested in the design and the synthesis of peptides bearing a metal binding site (such as the aminoacid-based ATCUN motif) or an organic ligand (such as phenanthroline, bipyridine derivatives …) to chelate a metal ion (copper, nickel, silver …) to equip the peptide with a metal-based activity (like ROS production, hydrolase, etc.). hydrolase = for detection of drug activity?

We aim to develop sensors (or probes) for metal ions, in particular for copper (II), mostly present in extracellular fluids such as blood serum, saliva, urine etc… Interest for measuring extracellular Cu(II) levels comes from their diagnostic value for Cu-related diseases such as Alzheimer’s disease or Wilson’s disease. We aim to sense Cu(II) by different means, including luminescence, F-NMR and wiht MRI contrast agents. We use mainly peptide-based sensors. They are  interesting for their biological relevance since they are almost identical to the natural molecules involved in the phenomenon seek to be monitored. Eventually, these probes would expand the toolbox for in vitro and/or in vivo monitoring and imaging, opening the door for a better understanding of biochemical events taking place in normal or pathological conditions. 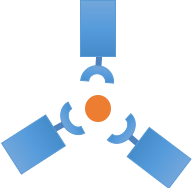 Bacteria need high amount of iron for their survival and proliferation. They excrete Fe-specific ligands called siderophores to scavenge iron(III) from the environment and bring it inside. We are interested to associate AMPs to iron or gallium chelates. Gallium(III) has similar affinity and coordination geometry as Fe(III) and cannot be distinguished from iron by the siderophores. Due to its redox inertness, the Ga complex brings an additional toxic effect. Different collaborations will allow to test these peptide-metal-chelate conjugates in bacterial cells and the best candidates will be grafted on medical surfaces in order to ensure long-lasting antibacterial activity of the surface.

Peptide-chelates linked to Fe or Ga

3) Peptide self-assembly for biocatalysts or biomaterials

Based on the expertise of the group in manipulating and characterizing amyloid peptides, we aim at designing non-natural peptides able to form fibers for biomaterials applications. As demonstrated by natural silks (from silkworm or spirders), protein-based material holds great potential in terms of mechanic properties. Plus, since they are bio-polymers, they can be ultimately produced from biological, renewable sources. First, the aim is to explore the link between the peptide sequence and the properties of the final material. This means that we seek at controlling (i) the peptide’s assembly, (ii) the folding of these peptides, and try to use it to tune the morphology and mechanical properties of the biomaterial. Second, onto these peptides, we aim at engineering metal sites, for structural purpose or to perform catalysis. Here, the challenge lies in controlling the properties of the metal site (coordination sphere, stability, catalytic activity).